Many years ago, I traded Calculus tutoring sessions for lessons in Sumi-e brush painting. David, a good friend, had spent many years in Japan, but was hopeless at math. He was small and compact, typically clad in much nattier apparel than my faded Levis and t-shirts. But each Sunday morning for a semester, in a small airless room in the Science Building at Bennington College, David would exhort me in his precise British accent, “Feel the bamboo, Lyn, feel the bamboo moving in the wind as you make the mark.” At that time in my life, I was better at calculating a second derivative than I was at sensing the intrinsic movement of a plant I had not seen. My sumi-e brushes have been long misplaced, but this week, the crow quill pen has its own lesson to teach. 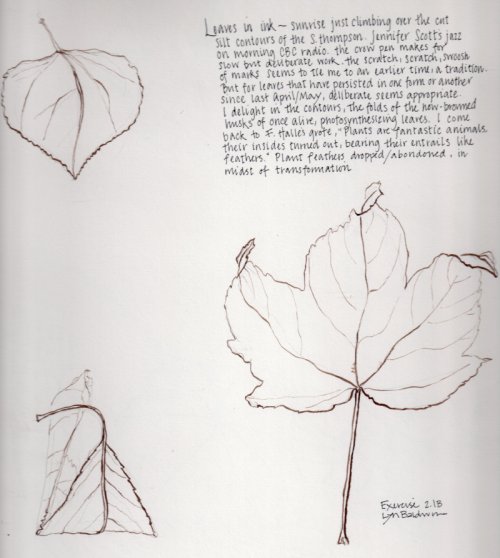 Over this last week of drawing, I have sensed how the movement of a reflexed petal or leaf might transfer to a downward pressure in the pen, thickening the line, embracing the curve.  But these pens and nibs have a discipline, an intent, all their own.  Toward and away, my hand understands with this pen, but horizontals require not just a shift in muscle but a clear intent to alter the pen orientation or shift the paper, or there is a terrible scratching sound that I think will break the nib.  But within this discipline, there’s also this sensuous sweep and swoop that is far beyond anything I’ve felt with the Sigma Micron pens or even the Rotring Artists pen. 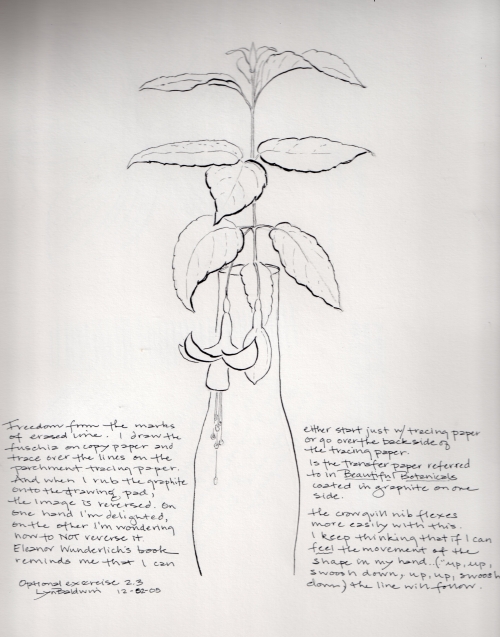 I draw like I garden.  I rarely have the whole plan in mind, but instead putter with this shape and then that and then get tempted by something new, something unrealized.  In many ways, pencil suits this muttering back and forth, but I often end up disappointed with the remnants of the mutterings erased over and over again.  It seemed fitting however, to use one form of carbon, graphite, to trace the contours of the faded leaves, built of another form of carbon.  Pile on the carbon, press hard on the page and the line jumps forward.  The entire time I drew the leaves, I heard Francis Halle’s words from In Praise of Plants, “Plants are fantastic animals, their insides turned out, bearing their entrails like feathers.”  Plant feathers, indeed.  The work of this week has caught these “plant feathers” in mid-cycle, from living to decomposed, from coloured to not, from carbon-fixing to carbon-releasing.  At this time of the year in the South Thompson Valley, when so much is grey and drab, it’s helpful to be reminded of the commonality between the organic and inorganic worlds. 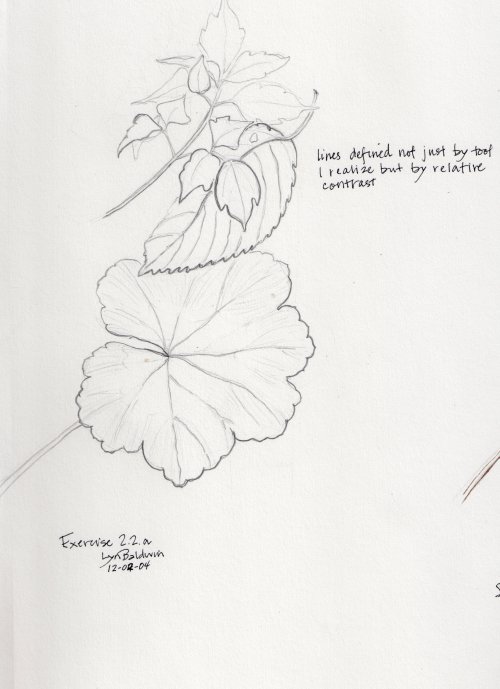