Living and dying—it’s the necessary beat to all things biological. But one is easier to see than the other.

Late this last winter, in the small cottonwood forest along the lower reaches of Petersen Creek, the dogs and I came across the ruin of a cottonwood.  The shattering was immense.  Pulpy white wood had been torn from its interior and exposed to the elements.  Pieces of bark, broken twigs and last year’s leaves covered the frozen ground.  The dogs sniffed around the broken debris of a life, parsing this destruction through their noses.  I paused, not in horror, but in commemoration, wondering what ended the life of this particular cottonwood tree. 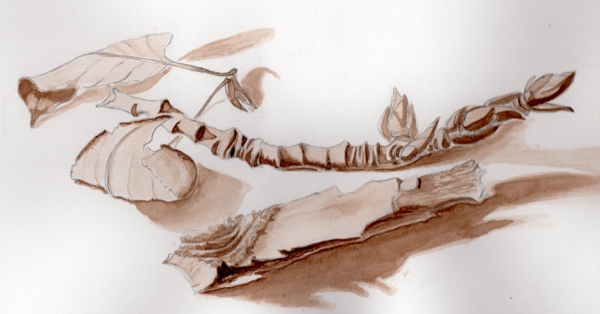 That day, there was little tree left.  I could find pieces that I recognized—a terminal branch tip, scraps of bark still covered in tenacious lichens, and a few browned, but miraculously intact leaves from last year’s growing season.  As startling as it was, this shattering was only the beginning of the cottonwood’s ruin.  At the tail end of winter, the motor of decomposition idled slowly.  But with the arrival of spring, as our oddly canted earth dipped its northern latitudes toward the sun, the chewers and the eaters and the decomposers rose up.  Fungal hyphae spread.  Bacteria proliferate, invertebrates tunnel.  It might take several years, but the ruin of last winter will fuel other growth, other lives, until all evidence is erased.

Spring brings with it not just decomposition but also the frenzied necessity of sex.  Perhaps it was the sight of last year’s ruin, but I have haunted the cottonwoods this spring, impatient for the signs of spring.  And in searching, I have learned more.  I have long known that cottonwoods (Populus balsamifera ssp. trichocarpa) are dioecious (male and female flowers on found on separate plants) but it was not until this spring that I took the time to inspect their flowers carefully. When I did, small packages of glory appeared beneath my hand lens and through the microscope lens.

In the Thompson River Valley, the blood red to fuschia purple male flowers appear before the more sedate, mostly green female flowers. By the time the female trees are in full flower, the male flowers have mostly dropped to the forest floor.

And the smell…all spring I have been trying to name the smell that accompanies the break of cottonwood buds.  The closest I’ve come is  to call it a musty sweetness.  Regardless of its name, the moment when I caught the first ghost of its appearance, I felt such relief, such joy.  It is a sign that the sap is rising, that rebirth has begun–the necessary counterpoint to last winter’s ruin. 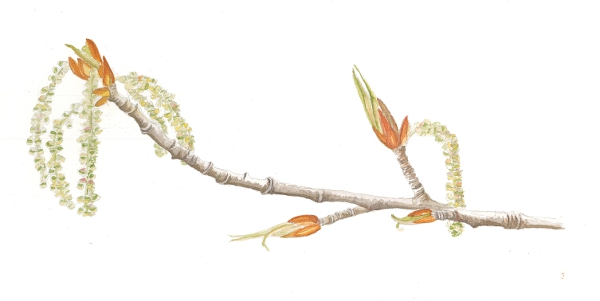 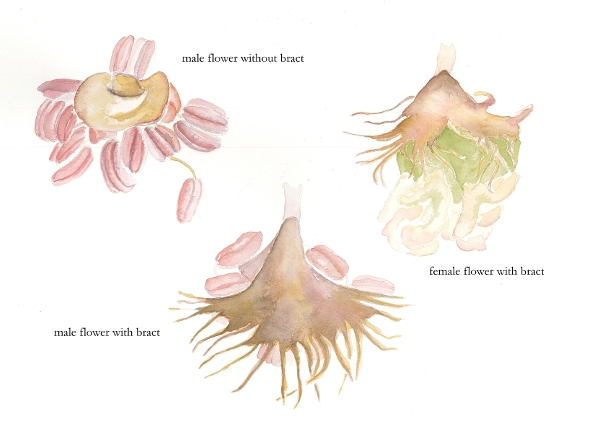 With magnification, male and female flowers