For weeks, I had great plans for this day–an adventure up in the hills, preferably on skis, preferably away from city streets and traffic.  But when I woke this morning, it felt much more important to spend this day attending to the natural history just outside my backdoor.  Shortly before sunrise at 8:00 am, Shasta, the dog, and I headed out the door to walk the high alley sandwiched between our neighborhood and the Trans Canada highway.  In my neighborhood, solstice is starlings and magpies, gathered in groups, punctuating the city noise with garbles and chirrups and abrupt calls.  I get caught up in the stark juxtaposition of the lower slopes of Mt. Paul emerging from beneath the inversion layer.  At the end of the alley, out of habit, Shasta turns to go home,  but on today, this day when the earth has tilted the northern hemisphere so far (23.5 degrees) away from the sun, when the sun has sunk to its lowest point in the northern horizon, I want to see more. 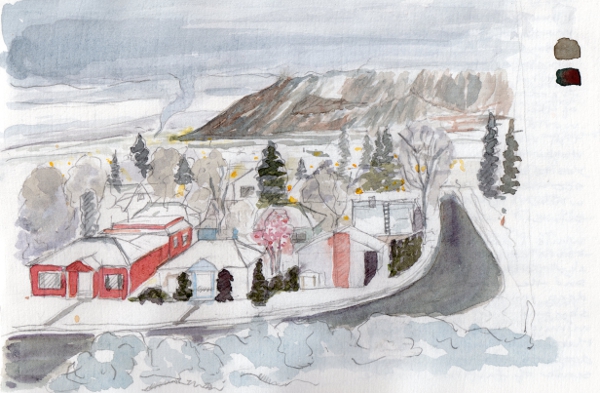 We wind our way through icy streets to the mad roar of Columbia Street.  Neither Shasta nor I are happy about the roar of the traffic.  At the intersection, the Dean of Science drives by in the little blue car, on his way to the office.  Even with the slush and the snow, with too much traffic noise and too little planning for pedestrians, the sight of others headed into work makes me grateful that I can be outside.

And then we are safe in the remove of the new pedestrian bridge over the railroad tracks.  A quick walk down past the water treatment center has us on the dike above the South Thompson River.  Abandoned pilings lead down to the water’s edge.  Even as I hear the school bell ring from Lloyd George Elementary and imagine my daughter in her desk, I see it.  The great blue heron is solitary,  head tucked, shoulders hunched, legs immersed. 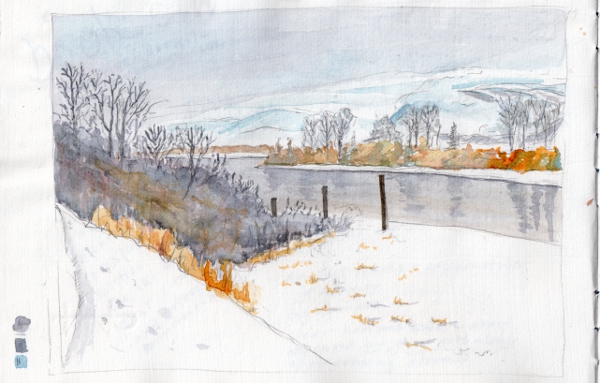 This is what I came in search of–the sight of other species immersed in their lives,  intent on living or hunting or even just enduring the cold.  This is what I want to spend the next year attending to and representing.  As Shasta shuffles impatiently, a common goldeneye pops up and disappears, in the shrubbery, a song sparrow (?) jumps from branch to branch, above the cottonwoods, a flicker flies up…down, up…down.  Most of my walk this morning has been cobbled together from scraps of city property unwanted or ignored.  The river is an exception to this and the natural history here is bigger and more exuberant.  My fingers are bone-cold but I’m content to go home, for now.

Late yesterday afternoon, I received a letter with happy news.  My sabbatical application has been approved.  This means that I will be able to spend most of the next year working on a project that I’m calling The Expeditionary Art of Home.  As part of this project, I will make an expedition to home, using the scientific and artistic tools of a naturalist, to investigate and illuminate the natural history phenomena that can be found here.  Traditionally, expeditions, whether civilian or military in nature, were made in service of a larger purpose:  colonization, pursuit of economically important species, national prestige or political strategy.  The orders governing my expedition are simple:  to celebrate the natural history of home using my field journals as an investigative tool.   In this project, home is defined as the watershed of the Thompson River, from its headwater in the Columbia Mountains to its confluence with the Fraser River.

Somehow it seems fitting to start this project on this day–this shortest day of the year.  Later in the afternoon, I pull the entire family, Shasta, Marc and Maggie, back down to the river just before sunset.  I want to spend both sunrise and sunset outside.  At the river’s edge, two swans (trumpeter, I think, although I’m never quite sure) glide stately upriver amidst a court of Canada geese.  Midstream, a muskrat v’s through the water.   Big fat flakes of snow fall gently on the water’s surface.  Cottonwood buds clench against the cold.  On a day burdened with night, I am giddy with excitement.  There is so much to see, to attend to, in this grand world.  After 8 years caught in the maelstrom of a new professorship, as our planet spins through its orbit from one solstice to another,  I get to.