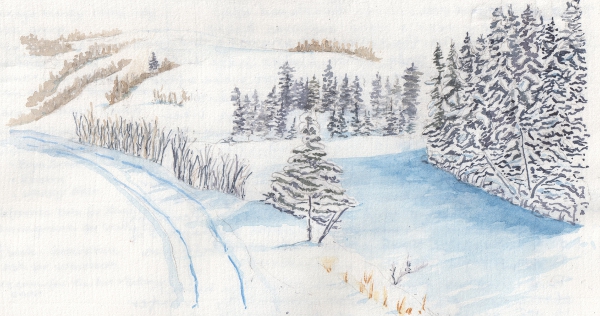 Since the Solstice, I’ve been searching for a way into winter, not the dirty, grimy winter that piles up on the edges of sidewalks, but the exhilarated winter  found in good fiction or natural history books.  After several attempts, winter reveals itself, not just as a period of time, but a place.  A place where known landscapes are inverted by the cover of snow, where a heavy fall of snow transforms conifer saplings into lumbering snow dragons and magicks cut stumps into madonnas or hobgoblins, where weasel tracks are revealed in the impressionable tapestry of freshly-fallen snow.

With my field journal in hand, investigating winter becomes an lesson in blue.  In this simplified winter palette, there are strong lights and darks and then surprisingly variable shades of blue.  Are the shadows in the snow phthalo blue or French ultramarine?  The literal scientist in me reaches for French ultramarine, while the artist in me argues for the strong pull of phthalo blue.  I dither, going back and forth with different sketches. 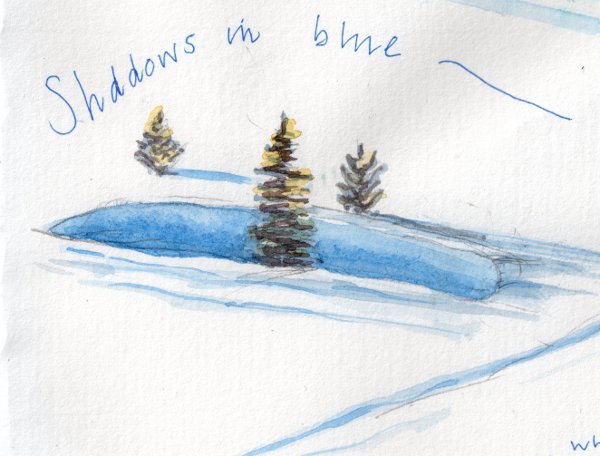 Yesterday I skied in to the upper slopes of Lac Du Bois with Daire and Alex, two students who are exploring field journals as part of their final undergraduate projects.  We sat in a companionable cluster, munching on the home-made granola bars that Daire and Alex had made, playing with colour and light.  We learned how quickly the water in our paint sets freezes when rested atop snowbanks, how readily the heat from our own bodies melts the surrounding snow, and how quickly shadows change in the afternoon sun.

Skiing out, the sun slipped behind the conifers on the western horizon, casting the blue sky into peach and gold lead (at least from behind my rose-coloured sunglasses).    One final gift–a winter moon, full and luminous, appeared just moments later on the far horizon.   Biologists say that the ecology of winter doesn’t begin until at least 20 cm of snow accumulates.  Subject to the physical processes of water evaporation and snow melt, each new snowfall transforms itself through a regular, often predictable, sequence of physical changes.  Even as it changes, snow has its own role to play in this game of winter ecology.  The fresh snow across these hills bounces nearly all of the sunlight back away from its surface, yet it can capture most of the radiant heat released by the earth.  Snow is both mirror and blanket. For many species, the full tide of the year depends upon the transformation of winter.  The wildflowers that fill this grassland in June won’t germinate without a sequence of cold days; the full surge of our rivers depend upon a vigorous snowmelt.  But as Daire and Alex and I ski the short distance back to our cars, I am content, reassured that winter has advanced fully in our valley; that come summer, the rivers will fill, the wildflowers will germinate; that right here, right now, the ecology of winter dances beneath a cold moon. 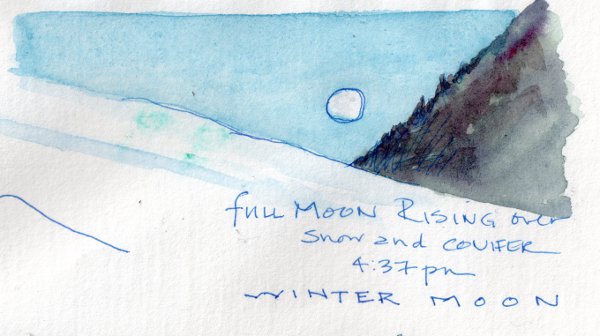